There will be unusual religious gatherings when the millions of worshippers in Nigeria’s commercial capital finally return to their centres of devotion in two weeks time.

Lagos State Governor Babajide Sanwo-Olu announced the lifting of the ban on religious gatherings yesterday following the two-month abstention aimed at stemming the spread of the COVID-19 pandemic.

But unlike pre-pandemic times, faithful of both religions would be required to conduct their services under restrictions and guidelines never before imagined.

Muslims could resume worship on June 19 while their Christian counterparts would begin the same on June 21, the governor said. Persons below 15 years and above 65 years, however, would be required to stay home. 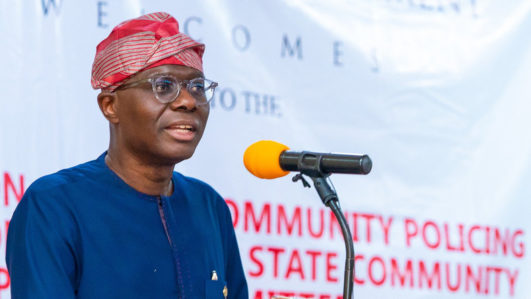 “We will be advising very, very strongly that persons below the age of 15, because of how well they walk around, and how they become difficult to hold down, should be excused from the places of worship, while citizens above the age of 65 should also not be allowed into these places of worship. These are very, very, very important points that we need to re-emphasise,” the governor said.

There would also be restrictions on the number of persons that may worship at any particular time. “We will be allowing our religious bodies to open at a maximum of 40 per cent of their capacity. We will be working with them alongside the Lagos State Safety Commission,” he said.

Sanwo-Olu explained further: “No matter how big your place of worship might be, you cannot have more than 500 worshipers at once. We’ll be encouraging people to have more than one service and ensure that they keep their premises clean and disinfected before another round of worship takes place.”

Services would also be restricted to Fridays and Sundays, thus excluding vigils and mid-week activities.

Hopes of resuming worship this weekend, following the reprieve by the Federal Government on Monday, were dashed as Commissioner for Home Affairs, Prince Anofiu Elegushi, declared that worship centres would remain closed.

At a press briefing on Tuesday, he had explained that the state government and religious leaders failed to reach an agreement over protocols and guidelines. “The possibility of reopening religious houses was ruled out totally,” he said, adding: “They (religious leaders) claimed they could not take the responsibility of ensuring that only 20 or 50 people are praying behind them. As an Imam said, he doesn’t know what goes on at his back immediately he is leading a prayer. He said if more than 20 or 50 people are staying at his back, he is not going to take responsibility for their presence. We ruled out in totality the issue of reopening the religious houses until we have a clear coast for us to do so.”

In the political capital, Abuja, FCT Minister Muhammad Musa Bello held a meeting with religious leaders where they were compelled to agree to a set of guidelines.

Thereafter, part of a statement released by Chief Press Secretary to FCT Minister Anthony Ogunleye read: “Churches are to open from 5:00 a.m. and close by 8:00 a.m. Each service shall be for a maximum of one hour with an interval of 30 minutes between services to allow time for disinfection

“Mosques are to open 15 minutes before Adhan and close 10 minutes after prayers (for the five prayers). Waiting period between Adhan and Iqamah should not be more than 10 minutes. Prayers are to be shortened, to reduce the duration of contact between congregations.

“Vulnerable individuals such as those aged 55 years and above, those with impaired immune systems (e.g. HIV, cancer treatment) and underlying co-morbidities such as diabetes and heart disease are advised to stay at home and consider remote participation or non-contact attendance such as drive-in services.

“All windows in churches and mosques should be kept open during services and the use of non-enclosed spaces/open-air services are encouraged to be used as much as possible. High-touch surfaces, high traffic areas, common areas, and bathrooms should be frequently cleaned and disinfected and those responsible for sanitation should use diluted bleach (1000ppm) to disinfect all surfaces after removal of visible dirt. Infected persons should be kept out to reduce the risk of onward transmission.”

Also, Osun State Governor Gboyega Oyetola yesterday ordered the partial reopening of worship centres for two weeks after a meeting he held with Christian and Muslim leaders in Osogbo.

Some of the guidelines include: “Jumat service, khutbah (sermon) and prayers must not exceed 20 minutes. Vulnerable individuals such as those from age 65 and above and people with underlying ailments such as tuberculosis and diabetes are to continue worshipping at their homes.

“Worshipers are to keep reasonable space in churches and mosques, and no worship centre must be filled to capacity during any service and solat. Attendance at any service or solat must not exceed one-third capacity of the church or mosque.

“There should be the provision of washing facilities or sanitisers for worshipers before entering the churches and mosques. Also, the use of face masks is important, sharing of worship devices such as microphones and other musical gadgets should be discouraged.

“Water and food distribution during service should not be allowed. Worshippers must avoid the exchange of banters and physical distancing must be strictly observed. Windows in churches and mosques should be opened during worship for ventilation. Signage and notices should be placed at strategic locations to remind worshippers of best hygiene practices to be observed.”

But in Kwara State, the Ilorin Council of Ulamas described the state government’s conditions for reopening mosques as too stringent.

The secretary of the council, Justice Salihu Olohuntoyin Mohammed (rtd) said: “The conditions are very difficult to adhere to based on out peculiarities. The majority of stakeholders are about the age limit of 65 years, which is listed for non-participation in prayers/Jumat service. In Islamic parlance, Imams are the leaders of congregations and the majority of them are within the age bracket of 65 and above. We urge the government to allow Jumat mosques to remain closed in the interim and ensure the review of the guidelines urgently.”

Meanwhile, at the daily briefing yesterday, PTF Chairman and Secretary to the Government of the Federation Boss Mustapha stressed the need to decentralise the COVID-19 response by bringing local government authorities on board. He also urged Nigerians to obey the guidelines for the restricted opening of worship centres.

Mustapha said states must drive aggressive campaigns at communities, to address behaviour change and debunk misconceptions and stigma.He noted that traditional and religious institutions also have a role in sensitising communities about the pandemic.

He said further: “In the last couple of days, the PTF has received inquiries on some aspects of the guidelines. We urge the utmost caution at all times. The PTF will continue to monitor the overall compliance to the easing of restrictions as well as the evolution of the outbreak. However, we will not hesitate to review as we progress, to avoid preventable risks of transmission.”

He advised: “It is in our interest to go into isolation facilities for close monitoring. A number of fatalities have been recorded due to change in the condition of patients while staying outside the isolation facilities. Our appeal is that, if agents of the state get in touch with you regarding testing, contact tracing activities, please cooperate. Also, let’s be prepared to be quarantined and monitor our health for the onset of symptoms because it is important for us to break the chain of transmission and prevent the further spread of COVID-19 in our dear country.”