The Chief Medical Director (CMD) of Lagos University Teaching Hospital (LUTH), Idi-Araba, Prof. Chris Bode, has provided reasons why some mothers and babies were evacuated to a corridor at the hospital.

The unfortunate situation was made public through a viral video made by an aggrieved mother who was driven to the corridor with her baby. Several patients and their relatives were seen along the corridor in the video, some with mattresses showing that they either sleep or rest there.

But Bode said: “The attention of LUTH management has been drawn to a video posted online by a lady to malign our hospital. The video is a total misrepresentation of the event that happened yesterday. 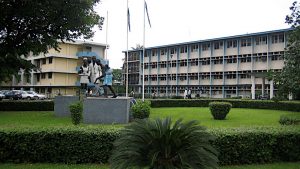 “This video was posted by a social media-obsessed individual who hid her face.

“Yesterday, November 25, 2020, we had some challenges with the place where mothers stay. This place also houses a Crèche illegally attached to it. We needed to evacuate the Crèche to create more space for mothers to stay. Our neonatologists have even syndicated some money to improve and expand the place for the comfort of mothers.

“There was a challenge during the evacuation of the Crèche; the attention of LUTH management was called to this. The Chairman, Medical Advisory Committee (CMAC), Head of Neonatology Unit and her team members went immediately to the place to clarify issues.

“The Creche was evacuated and the mothers were left in the building.”

Bode said the lady who posted the video and other mothers were aware of the efforts of the management and it was therefore a surprise to see the video online.

He said the people the lady captured in her video had nothing to do with the event she reported and she was aware that the issue was well managed by LUTH management within 15 minutes.

The paediatric surgeon said it was unfortunate that an individual would go this extent, taking advantage of the unmitigated freedom afforded the social media to smear the LUTH name even though her baby was successfully treated till the time of discharge in the same hospital.

The CMD said the newly-refurbished, wide corridor, with blue polycarbonate roof shown in the video was colonised by visiting relations of parents of children in nearby Children’s Wards and Children’s Emergency Centre.

“Some bring as many as four to seven relatives visiting and they crowd the place. LUTH and nobody have ever been allocated a corridor for anyone to stay. We, however, don’t drive those who hold court there despite the inconveniences,” he said.

Meanwhile, when The Guardian visited LUTH, yesterday, there was no sign of people sleeping on the wide corridor with blue polycarbonate roof shown in the video.