Not too long after Naomi Osaka won the Australian Open women’s final to improve her grand slam title haul to four in four attempts, the hype truly began. Certain sports websites tweeted about her as a possible GOAT while fans predicted plenty of major titles to come. Expectations skyrocketed.

It is understandable, of course, because what she has achieved is astounding and timely. Women’s tennis has been looking for someone to take the tour by the scruff of the neck for more than a decade. Nobody could have imagined the person to do so would be so cold-blooded that she would snatch her first four grand slam finals and break into the public consciousness so easily. As Justine Henin said on Eurosport: “To me, women’s tennis has a new boss. Naomi Osaka has this capacity, she has taken another dimension.”

Her career trajectory presents a potential title haul tennis hasn’t encountered in some time. Over the past decade on both men’s and women’s tours, the grand slam titles have been won by either four of the greatest players of all time or those who have managed only one to three titles. In a way, the big three in men’s tennis and Serena Williams have tricked people into believing that winning 20 or more major titles is easy. It is not. Only with time will Osaka indicate exactly where she is heading.

There should be further patience because tennis is a sport played on different surfaces. Osaka is essentially the highest profile hard-court specialist of all time. While only Williams, Steffi Graf and Monica Seles have won more grand slam titles on hard courts than her, Osaka has never passed the third round at either Roland Garros or Wimbledon. 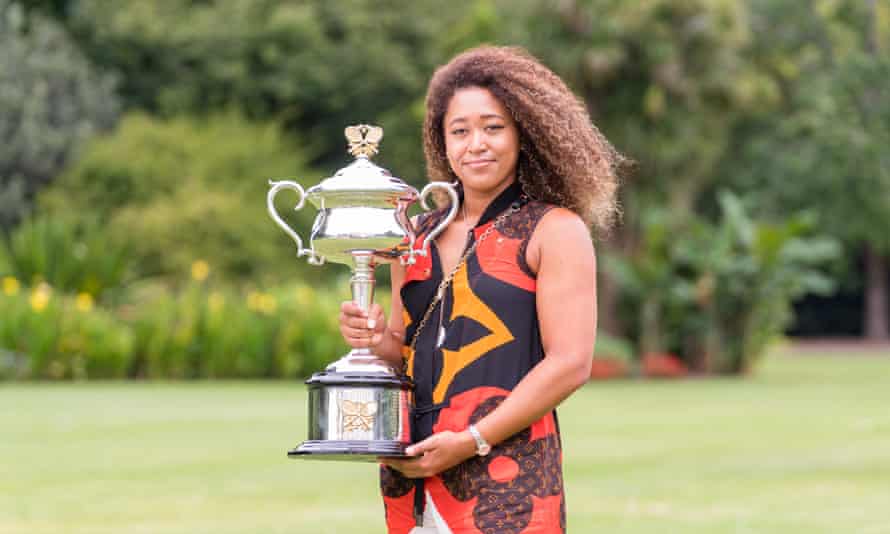 Asked in her press conference which surface she sees herself winning her next major title on, Osaka pointed out that her discomfort away from hard courts is because she did not compete in the junior circuit. “Hopefully clay because it’s the one that’s sooner,” she said. “For me, I feel like I have to get comfortable on those surfaces. That’s the key thing that, you know, I didn’t play juniors, so I didn’t grow up playing on grass at all. So I honestly think I’d have better luck on clay, because I think last year I didn’t play bad at all. It’s just something that I have to get more used to.”

One would think her enormous serve and fondness of the Williams sisters would lead her to look on a future where she can dominate on grass courts, but grass is actually the surface on which she is least comfortable. She is still unsure of her footing and she is irritated by the lower, inconsistent bounces. In 2019, she fell in the first round of Wimbledon against Yulia Putintseva of Kazakhstan.

Conversely, Osaka has made genuine progress on clay, in 2019 reaching the semi‑final of the Stuttgart WTA 500 and the quarter-finals at both the Madrid and Rome WTA 1000 events. Her movement is also an issue there; she once said she feels more comfortable sliding on hard courts than clay. Getting used to the “natural surfaces” will require more work and, probably, more losses from which to learn. There should be no surprise when they first arrive.

As Osaka looked on from her triumph in Melbourne, she also identified her goal as to replicate her form from week to week. It is something she has shown is capable of doing, both in her current run over the past six months and her strong run of form at the end of 2019 but she is yet to piece together a full, strong season.

“For me, I don’t play the most tournaments in the tour,” she said. “I just want to do well in all of the tournaments that I play. That’s my goal – to be consistent this year, not to have a huge drop-off randomly in the middle section like June, July, how I usually do.”

Osaka has marked herself down as both the present and future figure of tennis, but she still has a long way to go to unlock her full potential or even to demonstrate what it could be. Instead of holding her to impossibly high standards, it may be more satisfying just to follow her development wherever it takes her and to enjoy the ride.